It’s been quite the year for State Representative Heath Clark (R-Warner Robins).

You see, Rep. Clark has voted not once, not twice, not three times, but four times for major tax hikes in just the last month! 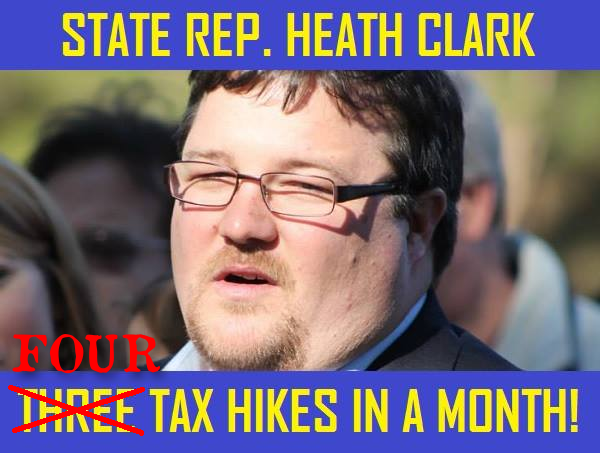 This onerous tax will cost Georgians $300 MILLION per year, driving up medical costs across the state.

This bill will not only raise taxes on Georgians by $274 MILLION per year but will also require businesses to report their own customers to the Georgia Department of Revenue.

Speaking of the Internet, one of the fastest growing sections of the economy has been the combination of mobile Internet applications like Uber, Lyft, and Airbnb combined with Georgia entrepreneurs with do-it-yourself attitudes.

Sadly, Rep. Clark’s third major tax hike vote of the year, for H.B. 225, was an attack on these Georgia entrepreneurs.

They say that socialism makes all of us equally poor.

Rep. Clark claims that he voted to raise taxes because he wants to make sure that taxes don’t ‘pick winners and losers.’

Well, the solution to that isn’t to make everyone poorer by raising taxes! The solution is to cut taxes for all businesses and individuals in Georgia.

Every two years we survey candidates for state office on issues important to our supporters.

When Heath Clark first ran for office in 2014, he signed a candidate survey6 stating that he would introduce legislation to:

*** Repeal the hospital bed tax and oppose all efforts to give revenue (taxing) authority to unelected bureaucrats,

*** Repeal all ad valorem taxes on automobiles, the prepaid motor fuel tax, and the motor fuel excise tax, and

“I will oppose any new tax and I will fight to see your tax burden reduced and/or eliminated.”

Rep. Heath Clark made these promises when he was running for office, and now he has broken all of them in a matter of a month!

We have to hold politicians like Rep. Heath Clark accountable to their actions.

Your calls, emails, and Facebook posts make a difference.

Let him know that he needs to make a public and sincere apology for betraying his constituents with these tax hike votes.

And let him know that you will hold him accountable at the polls should he continue to stab taxpayers like you in the back.

And please share this post with as many of your friends and family in the Byron / Centerville / Warner Robins area as possible.